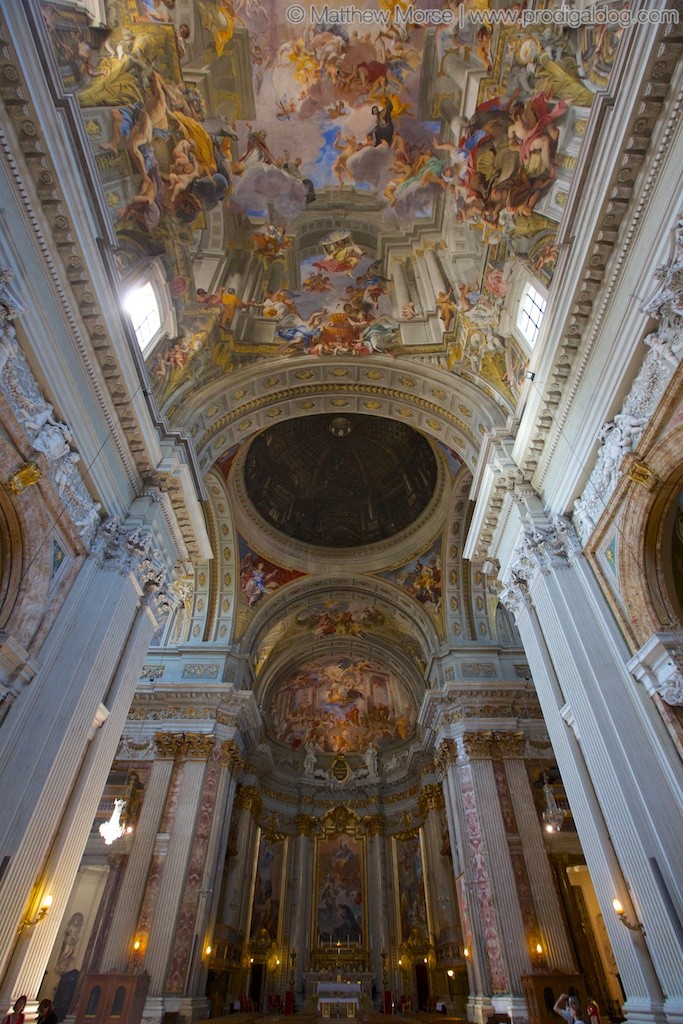 Rome is the most photogenic city I’ve ever seen. The city is practically littered with historic sites, ancient ruins, and ornate churches. And that doesn’t even include Vatican City. You can’t go wrong sightseeing in Rome, but there are some lesser known landmarks that are easy to miss. 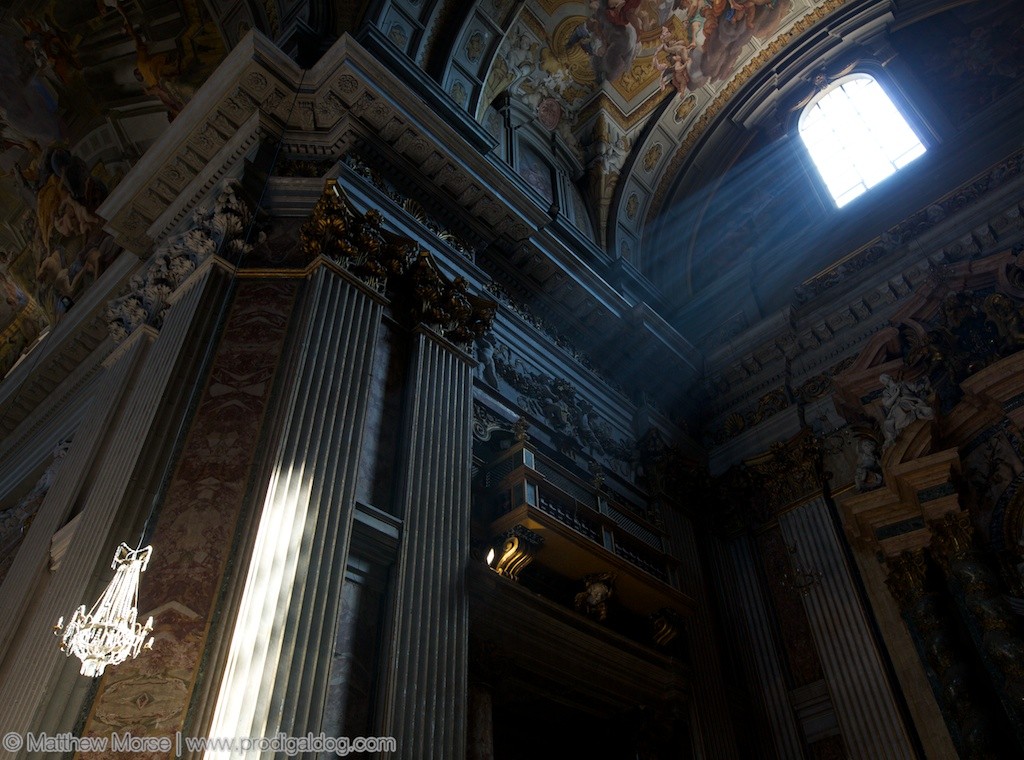 The city is most known for the Colosseum, the iconic Roman Forum, the Parthenon, or its many ornate public squares and fountains, but there are many other gems in the city as well. This post will focus on just one of them: the Church of St. Ignatius (Sant’Ignazio if you parli the Italiano). 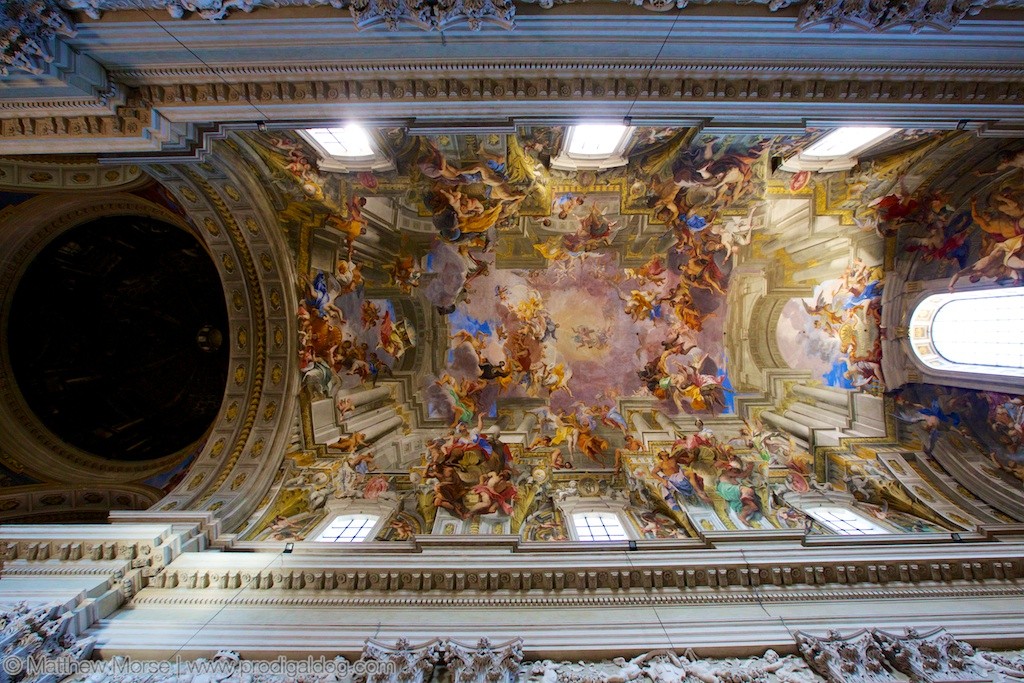 Of course, many of Rome’s churches are beautiful, but this church’s most fascinating feature is easily missed. The fact that it’s easily missed, in fact, makes it even more fascinating. You’d probably even miss it if you were sightseeing in Rome and didn’t know what to look for.

Believe it or not, the church in the photos above has no dome. 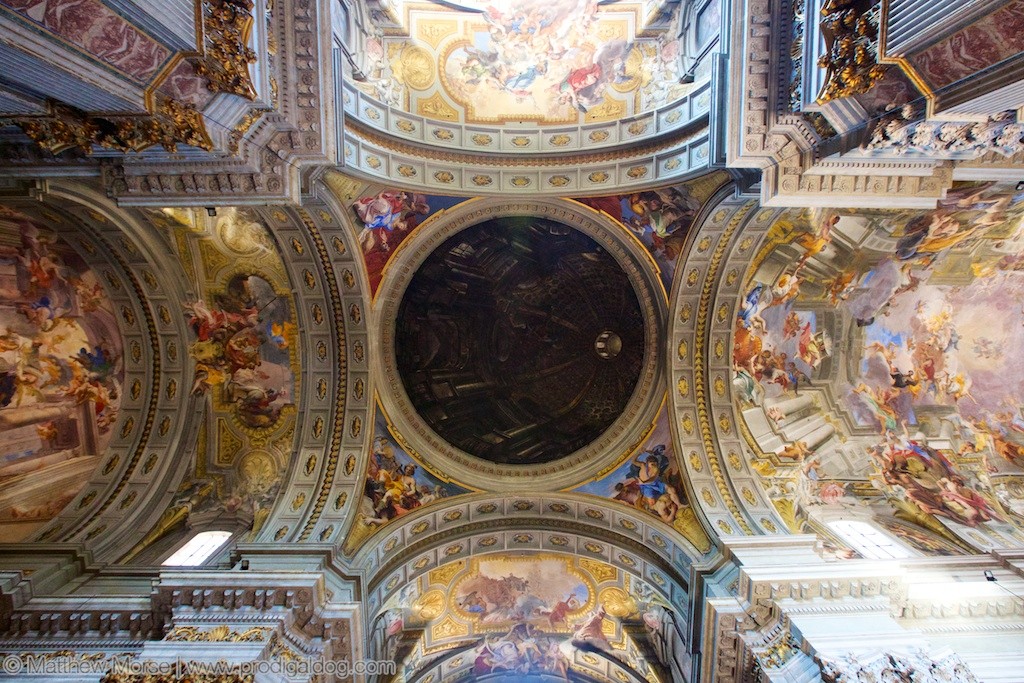 Believe it or not, the church in the photos above has no dome. What looks like a dome is actually a flat surface that’s been painted with a perspective so it looks like a dome when you first walk in. As with most things, it would have fooled me if I hadn’t had a smarter (and more well-versed) guide to point it out to me [hat tip to Lindsey]. 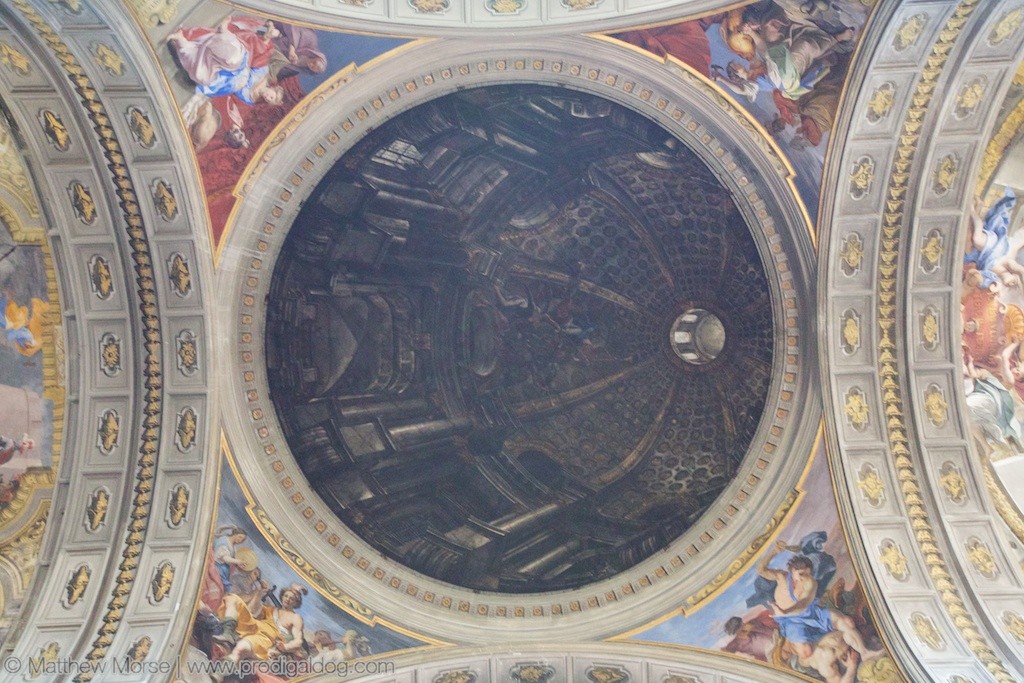 From this perspective and with a close-up zoom, the dome looks more two dimensional.

He’s a closer look at that dome from standing directly under it with a zoom lens. From this perspective, it looks a little more two dimensional than it does from the entrance. Neat trick.

Story goes that during construction, the church ran out of money to build a dome, so they hired a painter to create the effect of a dome, and he obviously did a great job. 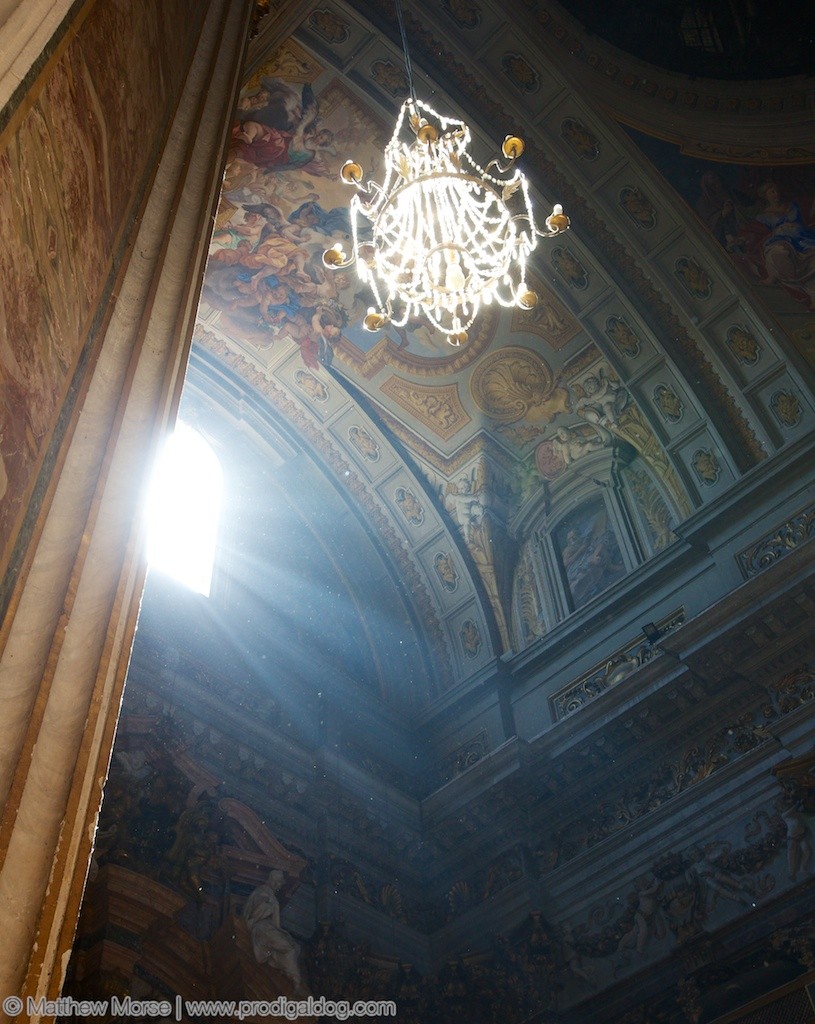 The rest of the church is, of course, equally stunning. I spent easily 5 minutes just taking photos of the way this light hit this one chandelier. The ceiling and architectural details are amazing as well. It’s impossible to take a bad photo in this place.

If you are sightseeing in Rome, I highly recommend you add this to your list. It’s centrally located, easy to find, and — bonus for us with crowd phobias — is likely to be fairly empty, as few know about it. It was also cool and comfortable on a hot day.

Stay tuned here for more posts on other places for great sightseeing in Rome, including, of course, its more well-known sites. 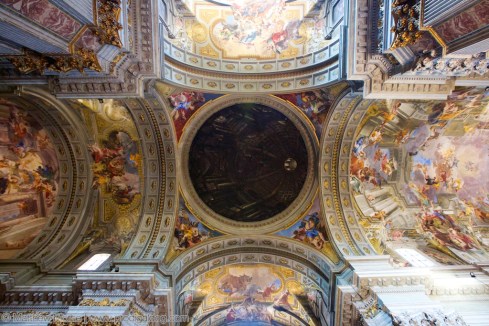 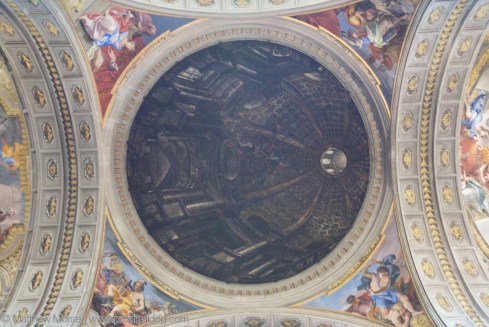 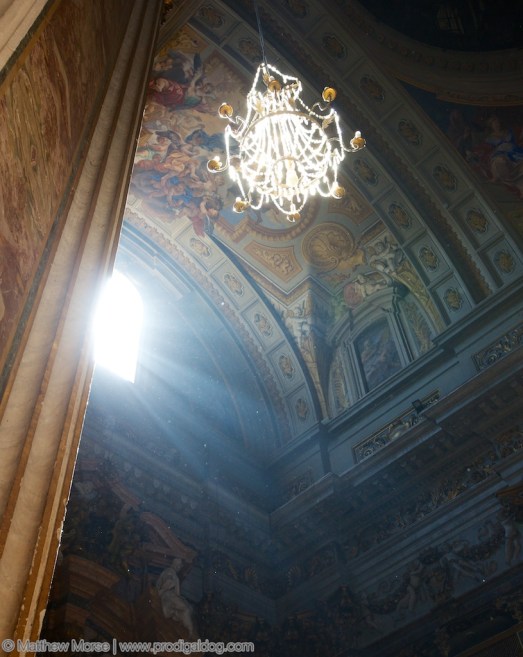 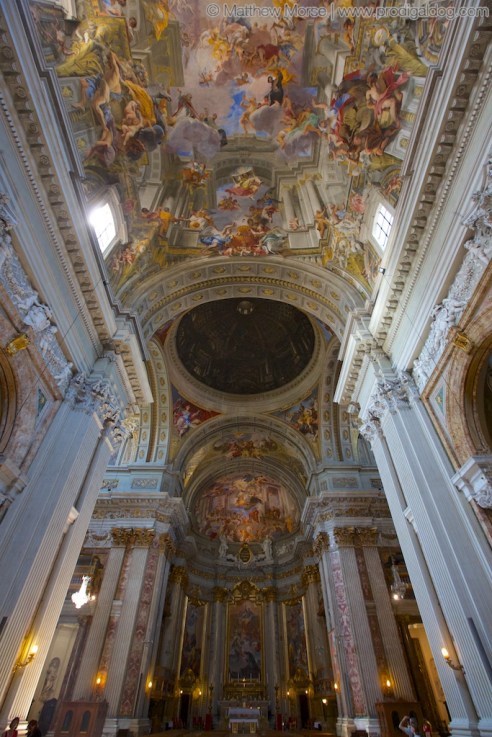 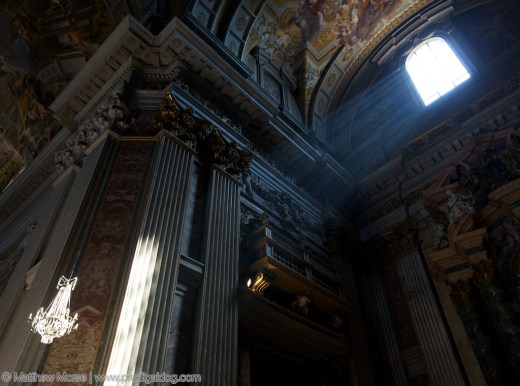 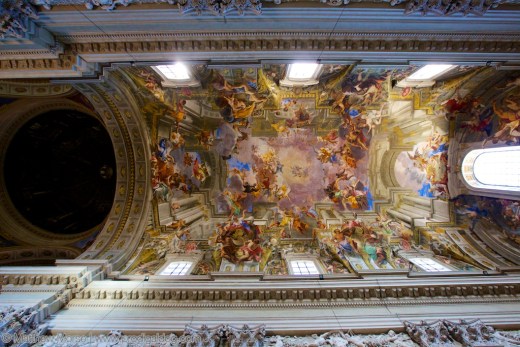